Site prep is underway; Groundbreaking is scheduled for October 5.

Join us for our groundbreaking ceremony on October 5 at 4:00 PM.  This event will be held to officially mark the beginning of the construction of the new girls’ dormitory.

Site prep work has been underway since one year ago, when an underground culvert was moved and extended to make room for the new dormitory.  Several weeks ago, the mobile homes and the trees were removed so that site grading can be done.  The goal for this fall is to have the foundation complete so that in the spring, construction can begin. 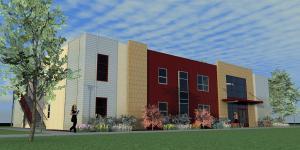 The new girls’ dormitory is part of our Breaking New Ground Comprehensive Campaign to raise $2.5 million in the three-year period ending June 30, 2014.  Toward the funding goal of $1.4 million for the girls’ dormitory, we have raised just over $1 million.  Although we are beginning construction, we will not complete the building until we reach the funding goal, so your help is greatly needed!