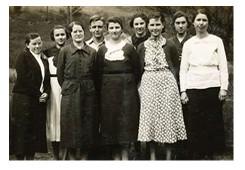 Courage, perseverance, and faith are words that describe those who set out in 1921 to establish a Christian school in the heart of Appalachia. Elizabeth E. O’Connor started with a one-room elementary school for the children in the small community of Oakdale in southeastern Kentucky. As a mission of the Free Methodist Church of North America, Oakdale was nationally known as an important outreach to this under-served area.

In those days, the campus was accessible only by foot. The next 30 years would see Highway 52 connect Oakdale to the city of Jackson, which made it possible for many local children to ride school buses to the free public schools. By that time, however, Oakdale had also developed a boarding program, so students from across the U.S. began participating in this new form of ministry. Anderson Hall, O’Connor Hall, and Rhodes Hall were built during those early years.

In 1968, the Free Methodist Church of North America turned over the governance and control of Oakdale Christian High School to an independent board of trustees. However, Oakdale chose to continue to reflect the ideals of the evangelical, Christian foundation, and continue a special alignment with its founding denomination.

The end of the systematic involvement and support of the Free Methodist denomination created a period of financial instability. Once again, Oakdale was like a fledgling institution, facing many of the challenges common to a new organization. Whereas denominational support and publicity had always been handled at the Free Methodist headquarters, Oakdale was then fully responsible for its own fundraising and for generating interest in its ministry, despite having very small budgets.

In 1987, Oakdale reached another crossroads. Years of declining enrollment and a deteriorating physical plant placed the institution at peril. Strong arguments were made that Oakdale was no longer a viable ministry, and again a proposal to close the institution was entertained. In an impassioned plea, longtime Oakdale administrator C. E. Odermann implored the board to keep the school open, because “God wasn’t done with Oakdale yet.”

In the early 1990s, new leadership in President Doug Newton brought fresh enthusiasm and a vision for an expanded ministry. From 1991 to 1996, Newton increased the visibility of Oakdale by speaking at college campuses, churches, and campgrounds. He founded Character Quest as an outreach ministry based on the character-building principles that are among the foundations of Oakdale’s effectiveness. Under his leadership, a major renovation was started on Anderson Hall, a multipurpose building that had symbolic as well as practical importance. Other campus improvements were made. Enrollment reached healthy levels and the support base grew as individuals saw evidence of a renewed Oakdale ministry. Newton also assembled a highly professional staff.

Dr. Dale Bidwell was appointed president in 1996. Building on the past successes of his predecessors, Bidwell gave leadership in important facets of the ministry, including the successful completion of the New Day 2000 Campaign. Diagnosed in 2000 with ALS (Lou Gehrig’s Disease), Dr. Bidwell took a leave of absence, eventually retiring later in the year. In 2002, Dr. Bidwell left his earthly home, leaving behind a great legacy of love for the Oakdale ministry.

In 2000, Daniel Fisher was appointed acting president, and in 2001 was made president of Oakdale Christian Academy.

In 2002, Oakdale received full, seven-year accreditation with the Association of Christian Schools International (ACSI), verifying the excellence of Oakdale’s academic and residential programs, as well as its organizational structure and management.

In 2005, Oakdale completed the funding and construction of the Beacon Center, a million dollar classroom and gymnasium building. In 2006, a campus-wide wastewater treatment plant was built.

New staff housing duplexes were completed in 2006 and 2007; in 2008 a third duplex was begun. Many campus improvements have been made, thanks to supporters and volunteers.

In 2009, Oakdale was approved for another full term of accreditation with ACSI.  In 2012, regional accreditation was awarded by Southern Association of Colleges and Schools (SACS) through AdvancED.

Since its founding, Oakdale has served students regardless of family income. In the early years, this sometimes meant a barter system with local families, in which produce and livestock were given as tuition payment. In the present, families are asked to pay an amount appropriate to their income level that still represents a commitment to the opportunity.

Oakdale is an institution of distinction and purpose. Its mission must be preserved. Much of American culture today no longer teaches character, encourages excellence, or upholds the Christian faith and values, giving teenagers little purpose or direction. There are pressures and influences on this generation that were almost unheard of until recent years.

The ministry of Oakdale Christian Academy is therefore becoming more relevant than ever. Oakdale endeavors to make preparations today that will set the stage for continued service to young people in Appalachia and across the United States.

A boarding school near me, and established in 1921, Oakdale now houses 50 students and is known for its excellent academic programs.