Home » Integrating Faith and… Everything! 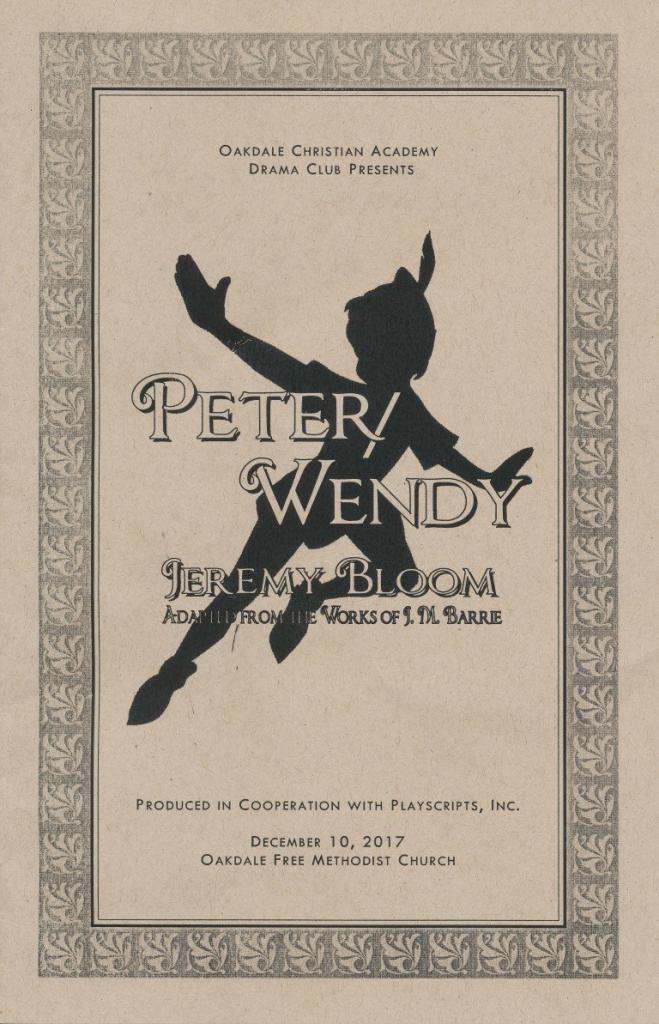 A lively and entertaining presentation of the Peter Pan story was given last night by Stephen Coates’ Intro to Acting class. Many of the students had never had the opportunity to participate in a theater production, and they did great!

Following the production was a reception, at which time one of the actors gave tribute to Mr. Coates for the work and energy he invested in them for the success of the production. The director’s notes in the printed program helps understand how Mr. Coates framed the meaning of the play with the students:

The story of Peter Pan has enchanted audiences for generations. Made famous by Broadway musicals and a Walt Disney animated classic, the story has come to symbolize the joys of youth and imagination.

However, those who make a closer examination of J. M. Barrie’s original works may find that a slightly more somber note clouds much of the story. The original Peter Pan has much to offer about the dangers of holding on to the past. Peter himself is a boy who refuses to grow up, and his insistence upon eternal youth means that he can never fully appreciate the joys that adulthood has to offer . . . joys that Wendy, on the journey to becoming a young woman, is beginning to understand and desire.

M. Barrie experienced the tragedy of refusing to let go of the past first hand. When he was a small boy, Barrie’s older brother drowned during a tragic ice skating outing. His mother was never able to come to terms with her son’s death and lost touch with reality, often dressing Barrie up as his older brother to try to relive past memories. I believe that Barrie’s experiences with his mother informed much of the core of the message behind Peter Pan . . . that moving on from the past, though sometimes sad, is ultimately a good and wonderful thing.

The writer of Hebrews says much the same thing about our Christian walk. Hebrews 5:12-14 says, “In fact, though by this time you ought to be teachers, you need someone to teach you the elementary truths of God’s word all over again. You need milk, not solid food! Anyone who lives on milk, being still an infant, is not acquainted with the teaching about righteousness. But solid food is for the mature, who by constant use have trained themselves to distinguish good from evil.” My hope is that as you watch this particular presentation of the story of Peter Pan, you would see not merely a celebration of the joys of childhood, but a gentle reminder that each of us is ultimately called to maturity and growth. Let us never get stuck in the old patterns and miss out on the joys of a new life!